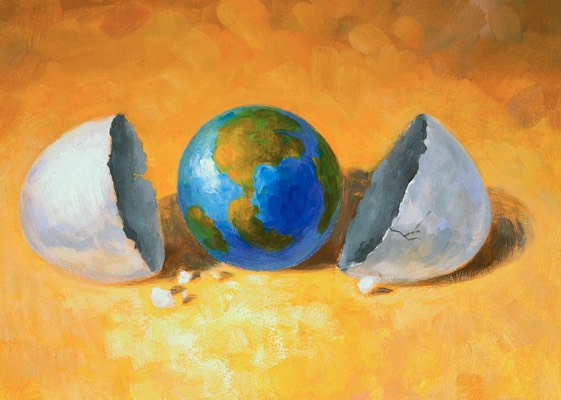 Most ancient cultures speak of the New Word that is coming. For the Hopi it’s the arrival of the 5th World. For the Hindus it’s the end of the Kali Yuga. The Book of Revelations talks about the new heaven and the new earth, and back in the day, Jesus (apparently) said “Thy kingdom come on earth as in heaven.”

But what exactly is the New World?

The Bible describes it as a peace that lasts for a thousand years, where lions and lambs lie down together. But in the light of all eternity, 1000 years isn’t a spit in the ocean. And although lions and lambs frolicking together is cool and I’m fine going vegan or living on prana … I don’t think this is the greatest vision possible.

So, ​​what does the New World really mean? How is it lived? Who am I in this picture?

How am I different?

That is the question. Because me and you being different—thinking differently, feeling differently, and acting differently—is the key to ushering in this new age, not vice versa. It cannot and won’t happen without us moving into our hearts and evolving out of fear and dumping the illusion of being separate from one another.

Actually, I got that last bit backwards. It cannot and won’t happen without us moving into our hearts and dumping the illusion of being separate from one another. When we do those two things, we automatically leave the fear boat behind and start paddling a different river.

​At least that’s what I’m discovering.

After decades of being coached to “dwell in my heart,” I’ve finally figured out it means generating the feeling of love 24/7. Not waiting for something or someone outside me to come along and inspire love in my heart. Not creating a vision board and focusing on manifesting the conditions that will make me happy and safe and create the effect called love. No no no.

It’s about generating it for no reason whatsoever.

For Pete’s sake, I know what love feels like. So why not feel it all the time? Moving into the frequency of love instantly brings a smile to my body’s lips and a sense of peace and calm. Why not dwell there? Well, because, you know, Trump and riots and conspiracies and secret cabals and the Proud Boys and Covid and no stimulus checks and Fake News and all the fear and uncertainty and anger and reactionary emotions those things (and more!) bring.

Plus, I don’t want to look like a bliss ninny. I don’t want to live in an unreal bubble denying reality. Plus, it’s just so damn much fun getting together (at least on social media) and trashing Trump or Biden or Putin or whoever. It lets me blow off some steam and indulge my sense of righteous anger for a minute. And there’s SO much righteous anger and upset and confusion bottled up inside that something’s got to come out! Right?

​​Better out than in!

But wait … hello? How much quantum physics do I need to absorb before I get it? We live in the world our emotions and feelings and thoughts create.

So I’m feeling it baby! Feeling love,  no matter what. And the more I do this the more I realize there is a whole reality of love … a genuine world that flows from that space. And it doesn’t look at all like the mainstream reality I have longed to leave behind for so long.

As for part 2, dumping the illusion of being separate, that’s taking a bit more effort and imagination. But how many more years can I go on being told “We are all One” and not experiencing it?

I think I’ve been waiting for Tinkerbell or Harry Potter to show up and ZAP me into another reality with a grandiose wave of their wand. Or maybe micro-dosing mushrooms would do it. Or something. But no. If oneness is the truth of existence, then it’s readily accessible.

​​So, doggone it, I am actively asking to know union. I am actively practicing sensing union. I imagine my brothers and sisters, seen and unseen, standing with me. I practice dissolving the appearance of separation, leaning into the sensation of infinite support … having the entirety of existence at my back, feeling the same love I’m feeling, holding my “hand” and walking with me. And the more I do this (and I do it a lot!) the less fear has a hold on me. And the less fear has a hold on me, the more I trust the feelings of love and union.

I am not alone. I am filled with love, feeling love, extending love. Silently. Invisibly. The whole of Creation is with me. The universe wants this … to go in the direction of evolution … to express and experience a New World. And it’s there. It’s real. I can, for the first time in my life, sense it. And the more I sense this other world, the more bizarre and unreal the world created by fear and separation is looking.

Now is the time.

Feel love. Ask to know unity. Resist the temptation to react to and thus embolden the fear world. Yeah, we all have to work. But we don’t have to buy into the drama. Let it go …

The New World is real. And it’s calling you. ​​